Cost of Doing Nothing 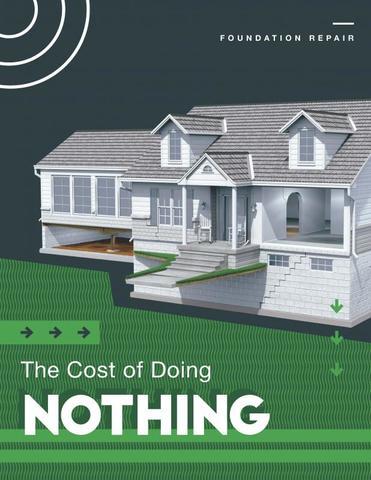 So, that crack in your foundation—the one you discovered last summer? You know the one: just a few inches long, barely there, probably just due to your home “settling.” Well, if you check again the next time you’re doing laundry, you’ll notice that it’s a little bit bigger than it was last year. Not much, grant you, but definitely bigger.

But there are so many things that are more pressing, right? There’s the sticking windows and doors on the second floor and the ceiling gap that’s developed near the fireplace. You should probably attend to those and put off fixing your foundation for another year or two… right?

Well, you could. But here’s the thing: foundation problems don’t get better with time. That means they will never be less expensive to fix than they are today. And you will need to fix them eventually. Either when they become so bad your home’s structure is in danger or when you sell your home.

Speaking of selling your home, realtors tell us that foundation problems force them to discount homes up to 30 percent come sale time—so the cost of a repair is usually much less than the amount you’ll lose on a discounted sale. And you can forget about hoping the prospective buyer won’t notice if you don’t tell them; the Real Estate Seller Disclosure Act requires you to make any foundation issues known before selling your home.

So, you need to really think long and hard about this. Do you fix your foundation problems now, or do you wait and fix them later when they’re much more expensive?

You’ve probably already realized that, both financially and structurally, it just makes sense to fix your foundation problems right now. Yes, foundation repair can seem daunting, and it can be somewhat expensive, depending on the extent of the problem. But most reputable foundation repair contractors will offer financing that can divide your cost into easy-to-handle monthly payments. So, there’s really no reason not to do it sooner rather than later.

And those sticking doors and windows and ceiling gap? The good news is, they’re likely caused by your home’s foundation problems and can be fixed when your foundation is lifted back to its original position. Talk about a win-win!