How to Encapsulate a Crawl Space in GA and SC 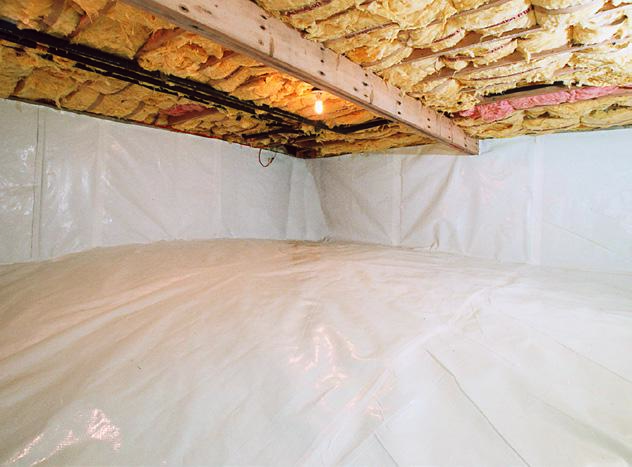 On paper, in theory and in reality, exposed earth contributes a lot of water vapor into crawl space air. The earth is damp, and as that damp soil dries beneath the house the water vapor moves upward. In most climates where there are dirt crawl spaces, you can never dry the earth, and this invisible stream of water vapor from the exposed earth in a crawl goes on forever.

There are several other ways water gets into a house. Groundwater seeps, leaks and even rushes into many crawl spaces. It enters under the footing, between the footing and the walls, right through the block walls and through cracks in poured walls. After it seeps in it just lies there in puddles, slowly evaporating upward into the house.

The girders, floor joists and subfloor quickly become attacked by mold, fungus and insects that can literally eat away at your home.

Fixing your dirt crawl space problem delivers a lot of benefits, without requiring you to undertake a terribly expensive and disruptive home improvement project. There are four steps to encapsulation.

If there is water leaking into your crawl space from a HVAC unit, leaky pipe or other source of water, the first step is to fix it. Lowcountry Basement Systems recommends the installation of a sump pump specifically designed to keep crawl spaces dry by pumping water out of the space.

2. Isolate the House from the Earth

This step is the key to solving your dirt crawl space problem. Installing a vapor barrier will help prevent water, mold and critters from entering your crawl space. Lowcountry Basement Systems uses a product called CleanSpace liner. It is a 20-mil thick plastic liner, similar to a pool liner, that can be installed in your crawl space to seal off your home from the earth.

3. Seal the Vents and Other Outside Air Leaks

When a Complete CleanSpace Encapsulation System is installed, you want to seal vents to keep the unconditioned outside air out. But vents aren’t the only way outside air can get into your crawl space. Spaces under the sill plate and around pipes and wires to the outside, poorly fitting or rotted hatch doors, and other openings are all paths that need to be sealed to get the best results.

Even though the most thorough job of sealing out the outside air may leave your space feeling humid. You may still see some condensation in the hot days of summer. Humidity in the crawl space can lead to mold. Lowcountry Basement Systems recommends dehumidifying the crawl space with a SaniDry Sedona dehumidifier.